Top
Don’t forget I am having a sale on sponsor spots to fill it up for the rest of March. $2 for any spot, based on first come first serve. You can read more about my advertising options HERE.
So now that it has been a month since our trip to London, I should probably get to the end of the story. In cased you missed it, don’t forget to read part 1 and part 2.
We decided to catch an early ferry from Dover to Dunkirk, this meant getting up at 4:30 and getting the kids out of the hotel by 5 am. They were not originally impressed with this idea, but we managed to get them in the car.
Then… our GPS wouldn’t work. We messed around with it for like 20 minutes, which put us a lot behind schedule. Finally, we just could not wait any longer to start heading out of London, so we just made a guess as to what direction we should take. Luckily the GPS came up shortly afterwards, and besides some traffic, and one other missed turn we made it to the ferry without too much hassel. The kids were tired and pretty quiet for this part of the trip.
The ferry itself was a bit rough, but Sean kept the kids busy in the play area and I just didn’t move around much. I was more than happy when we docked and got back into the car. An on we went. Our goal destination was a hotel in Germany, meaning we had to drive through France, Belgium, the Netherlands then Germany to get there.
The kids slept a good part of the way, and I think we only had to stop once. Funny thing though, when we entered Belgium, the entire car filled with the smell of waffles. It seems there was a big factory in the town we drove through right on the border.
We made it to our hotel before 5 pm, which was awesome. I had found a smaller hotel outside of any bigger cities in Munster. We booked it for two reasons. It was cheap and it had theme rooms. At first we were not sure what we were coming too. But we were very pleasantly surprised. Sean got us checked in and was told that we had the Felix the Rabbit room (one specifically for families).  When we opened the door this is what we found: 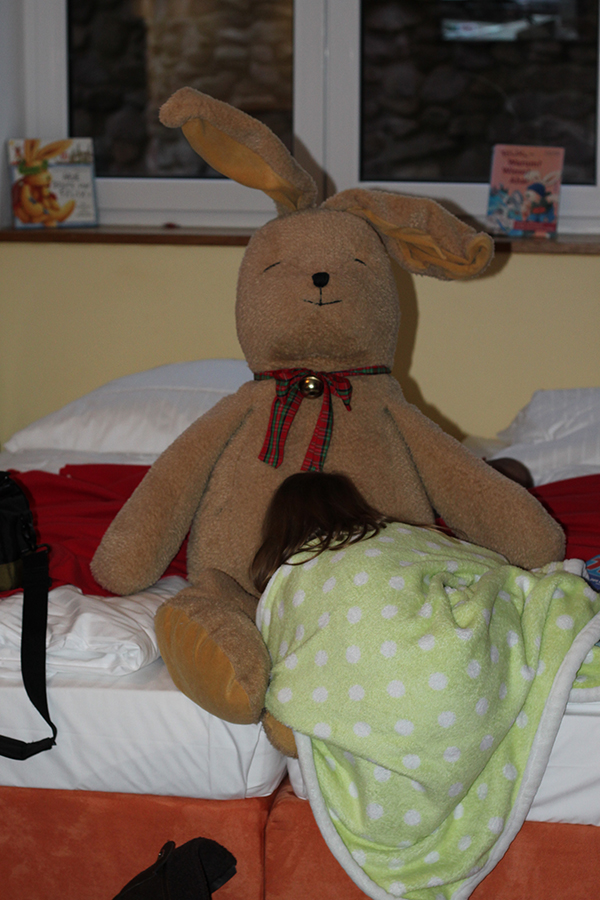 The expression on Elisabeth’s face was priceless when we opened the door to find a giant stuffed rabbit sitting on one of the beds. The rest of the room was decorated too: 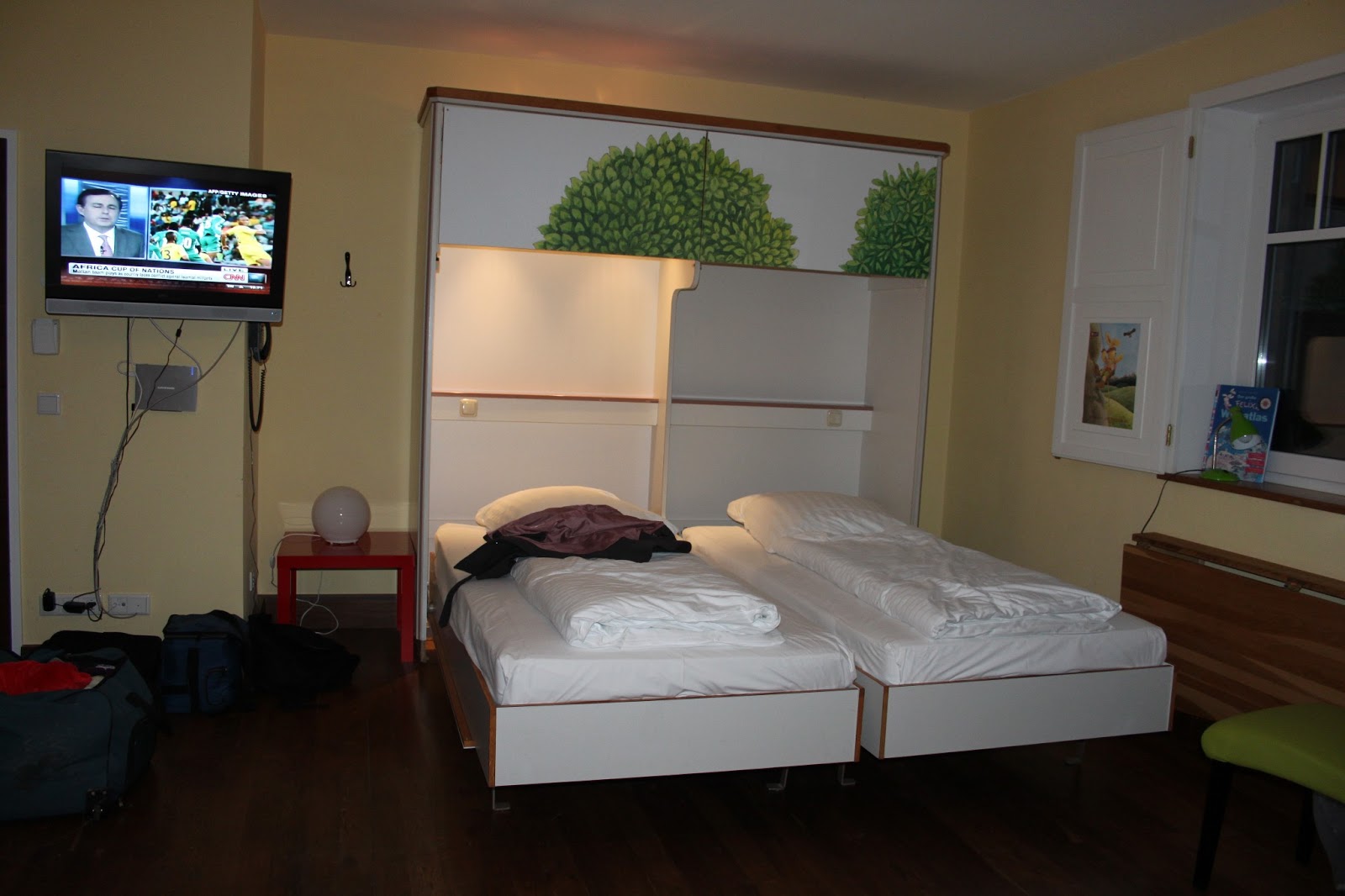 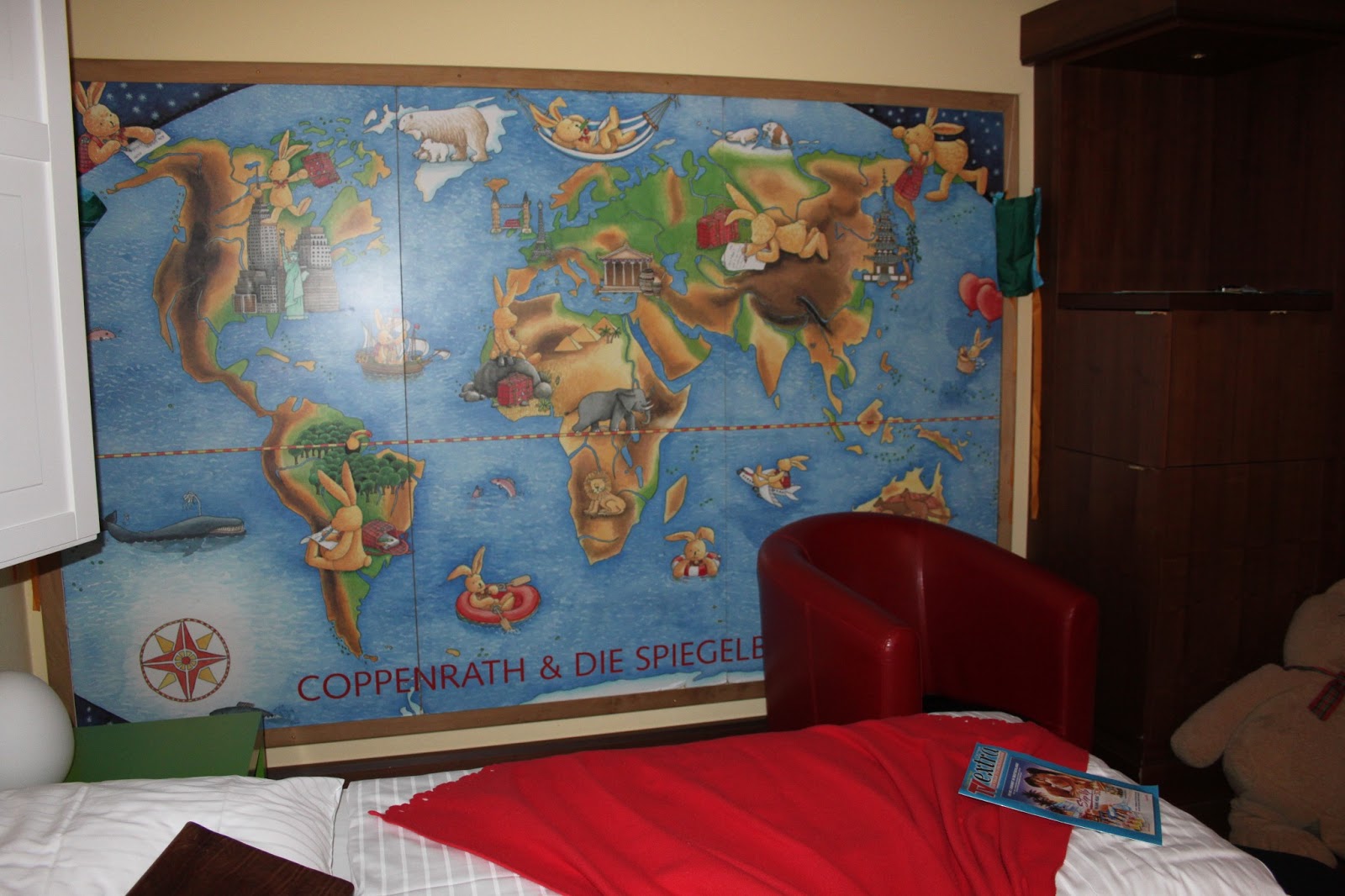 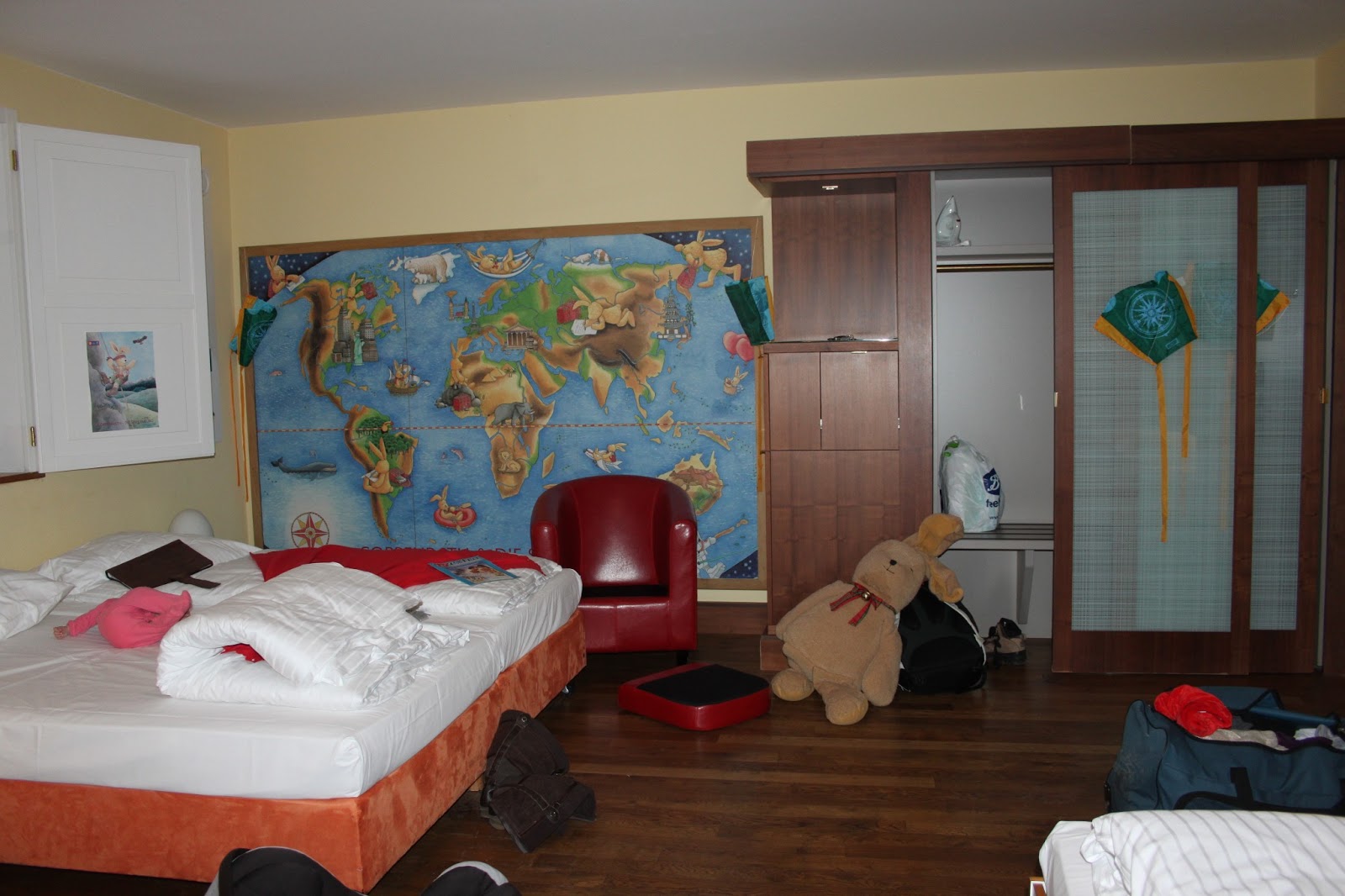 It was really wonderful! There were book for the kids, enough beds for all of us, a very fancy bathroom and lots of space. I didn’t manage to see the reception or the dining hall, but Sean said they were really nice and fancy. We decided to order some food. It was the best food from the trip. The food was a bit expensive, but worth it! This was probably our favorite part of the trip.
This hotel as a variety of themed rooms. Sean and I have plans to go back there just the two of us some time.
The next morning we got up early again, thinking the kids would go to sleep in the car and would make it a good part of the way home before stopping. The kids had other plans. Elisabeth did fall asleep. Julius did not. Olivia did. However about an hour in Sean was just too tired. So we pulled into a truck stop so he could get a bit of sleep before.
He slept. Elisabeth and Olivia slept. Julius watched a movie. I sat there playing horror movie senarios through my mind every time a car drove in and parked. You see it was dark, and it was a small truck stop in the trees just of the high way. There was a light dusting of snow on the ground. It was perfect murder scene stuff! After about 30 or 40 minutes, it started getting pretty cold in the car, so I woke Sean up. Secretly… I had just creeped myself out.
After this the trip was uneventful. I think it took us about 8 hours that day to get home.
A month after the trip, and I am still pretty disappointed with it. Traveling with 3 under 3 was not a fun adventure. That being said, we are planning a trip with the kids to Ireland in the fall…. so I guess it really couldn’t have been that bad…